Around the World with Gateway's Advisors

My husband, Norm, and I found Buenos Aires to be a fascinating, sophisticated city– from the outdoor markets in the Recoleta District, to the brightly-colored buildings of La Boca, to the tango dancing in the streets! We stayed at the Four Seasons Buenos Aires, located in a beautiful residential area just off the tree-lined Avenido de Julio.  The hotel offers sleek, modern hotel rooms and more traditional suites in the adjacent building, La Mansion. It also offers a heated outdoor pool, a full-service spa and a high-tech health club in addition to two wonderful restaurants.
We then moved on to Mendoza, the main wine-producing region of Argentina. We stayed at the Cavas Wine Lodge, located in a private 60-acre valley, in the center of a winery, at the foot of the Andes Mountains.  Its understated elegance offers wine tastings, bodega hopping, hiking, and rafting.  Each room has its own plunge pool and outdoor fireplace.
It was an awesome experience in Argentina! In mid-November 2014, I left for Casablanca, the doorway to an adventure, years in the making. My husband and I, along with a group of fellow adventurers were sponsored by Heritage Private Travel. We traveled across Morocco, taking roads that led to Fes and through the Atlas mountains, across the Sahara on the backs of camels, to the cities of Ouarzazate, and Marrakesh. I was amazed by the culture, the people, and the food.
We spent three nights in the medieval city of Fes at the Palais Amani, a beautiful Riad located in the medina. The medina has narrow alleys where you will find the Souq; the market where craftsmen sell dates, fish, spices and carpets. In Marrakesh, we were guests of the Amanjena Resort just outside the medina. The Amanjena is tranquil oasis, designed to echo the Berber villages in the High Atlas Mountains.
I was also able to visit many of the other Riads and luxury hotels in Marrakesh including the Four Seasons, La Mamounia, Palais Namaskar, the Royal Mansour and the Kasbah Tamadot.
Morocco has so much to offer for every kind of traveler! 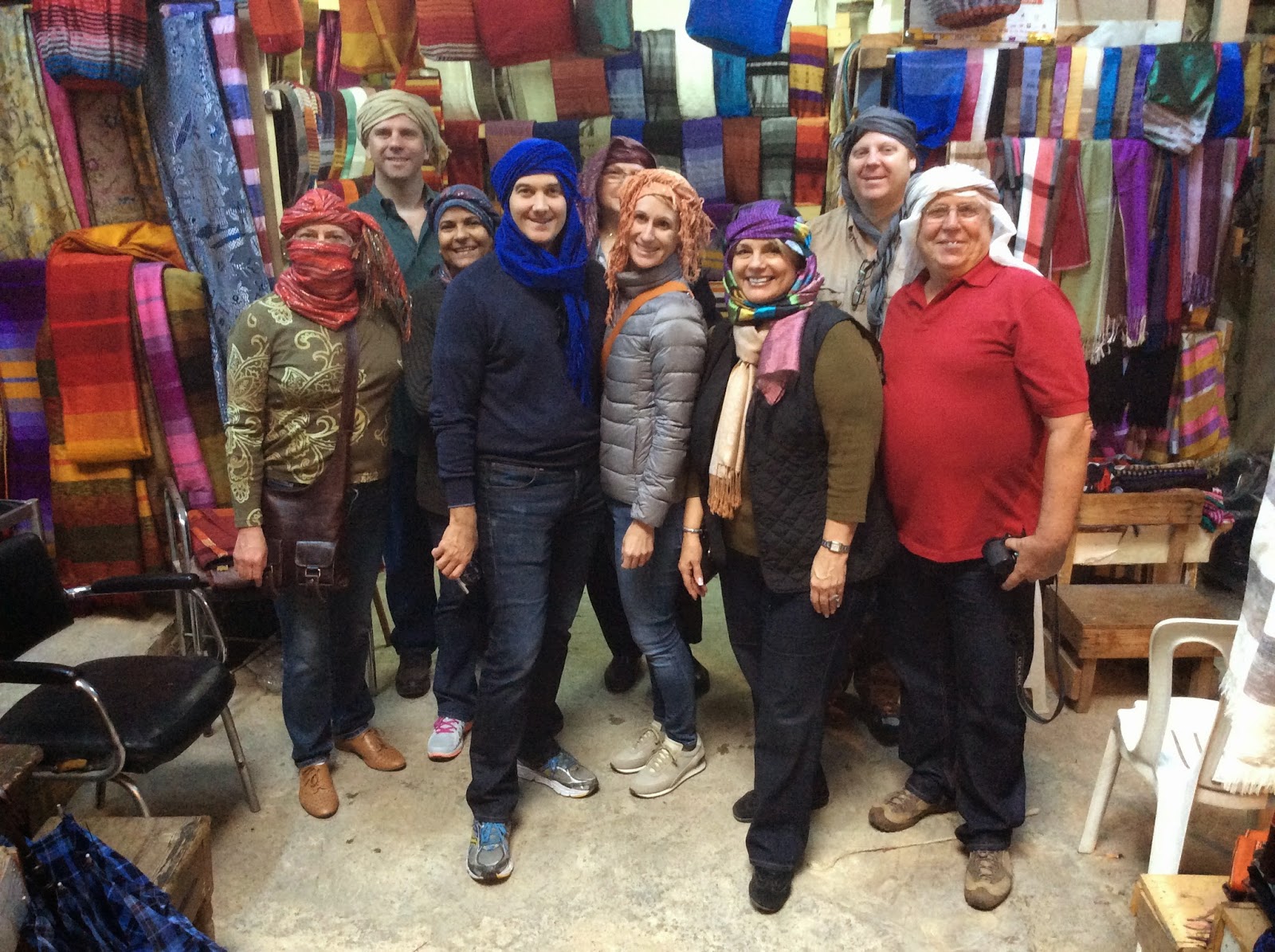 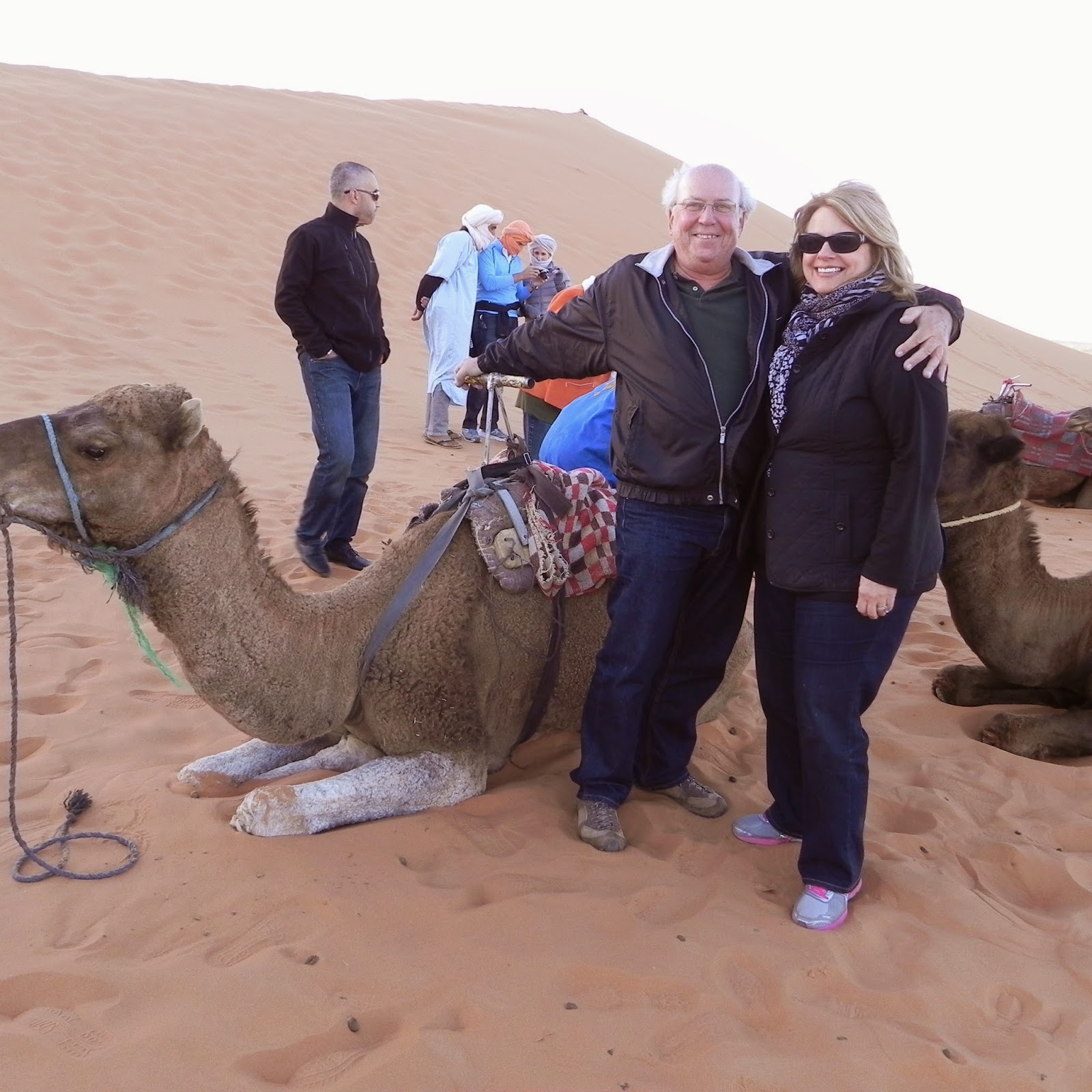 Vietnam proved to be the highlight of a recent trip to south-east Asia that also included Laos and Cambodia. Those of us who remember the war there during the 1960’s and 1970’s might be surprised to hear it called locally the “American War”, and even more surprised to find that we are held in high regard by the Vietnamese. They are incredibly sweet, kind and friendly people.
One of the most exciting adventures is a cyclo ride (kind of bicycle rickshaw) at dusk through the busy streets of Ho Chi Minh City. What seems like a zillion motorbikes whiz past you from all directions, but somehow you survive!! A less harrowing but fascinating cyclo ride is through the narrow winding streets of old Hanoi, where each street is limited to a particular type of goods (shoes, for example, or paper or jewelry). It’s similar to the old part of Delhi in India.
Staying in the historic and elegant Sofitel Legend Metropole Hotel in Hanoi was as interesting as it was luxurious.  A tour of the hotel included a recently unearthed bomb shelter under the pool, with photos and recordings of Joan Baez singing inside it during a raid. The Virtuoso amenities included a heavenly foot massage at their exquisite spa.
Our custom tour operator arranged amazing people-to-people experiences for us. One day we visited the lovely home of a couple in the countryside. Our hostess prepared an outstanding home cooked lunch; then we were joined by three of her closest friends since childhood. They all serenaded us in a unique style that’s considered by UNESCO to be a World Heritage Cultural Treasure.
Our final and best adventure was a private cruise aboard a luxury junk in Ha Long Bay. With our own guide and a crew of four (including a gifted chef), we sailed this magical area for two days and a night. No words can really describe it. About two thousand jagged “islands” bursting up into fantastical shapes out of an emerald sea. A sandy beach from which to kayak. A beautiful cave for picnics. Colorful floating  fishing villages.   This was a true once-in-a-lifetime “pinch-me” experience.  I would recommend it for anyone, but for honeymooners, I can’t imagine a more private or romantic interlude.
There are also some fabulous beach resorts in Vietnam and much, much more; Hue, Hoi An and Da Nang are a few of the high points.
Vietnam is a destination that definitely belongs on your bucket list! 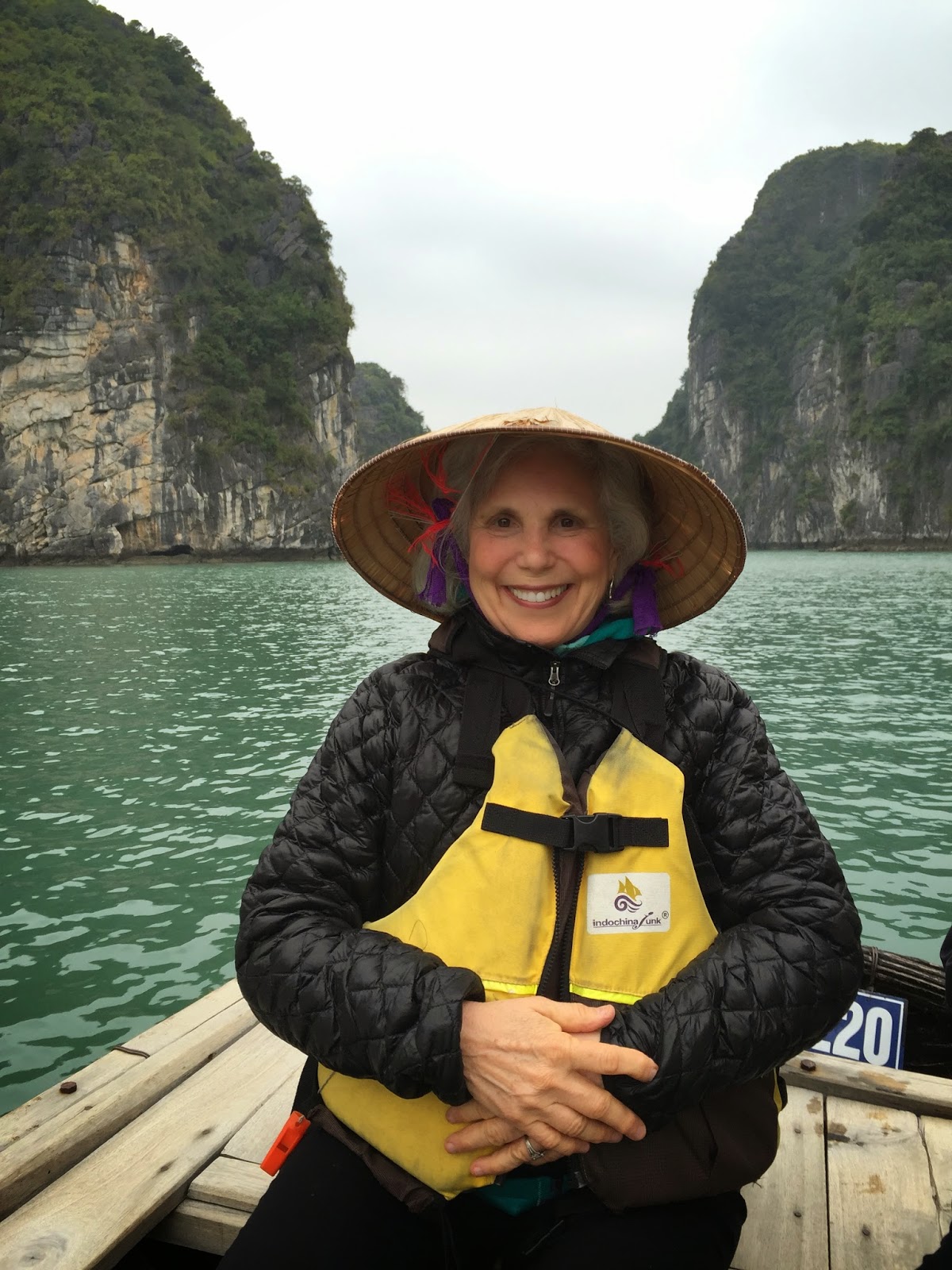 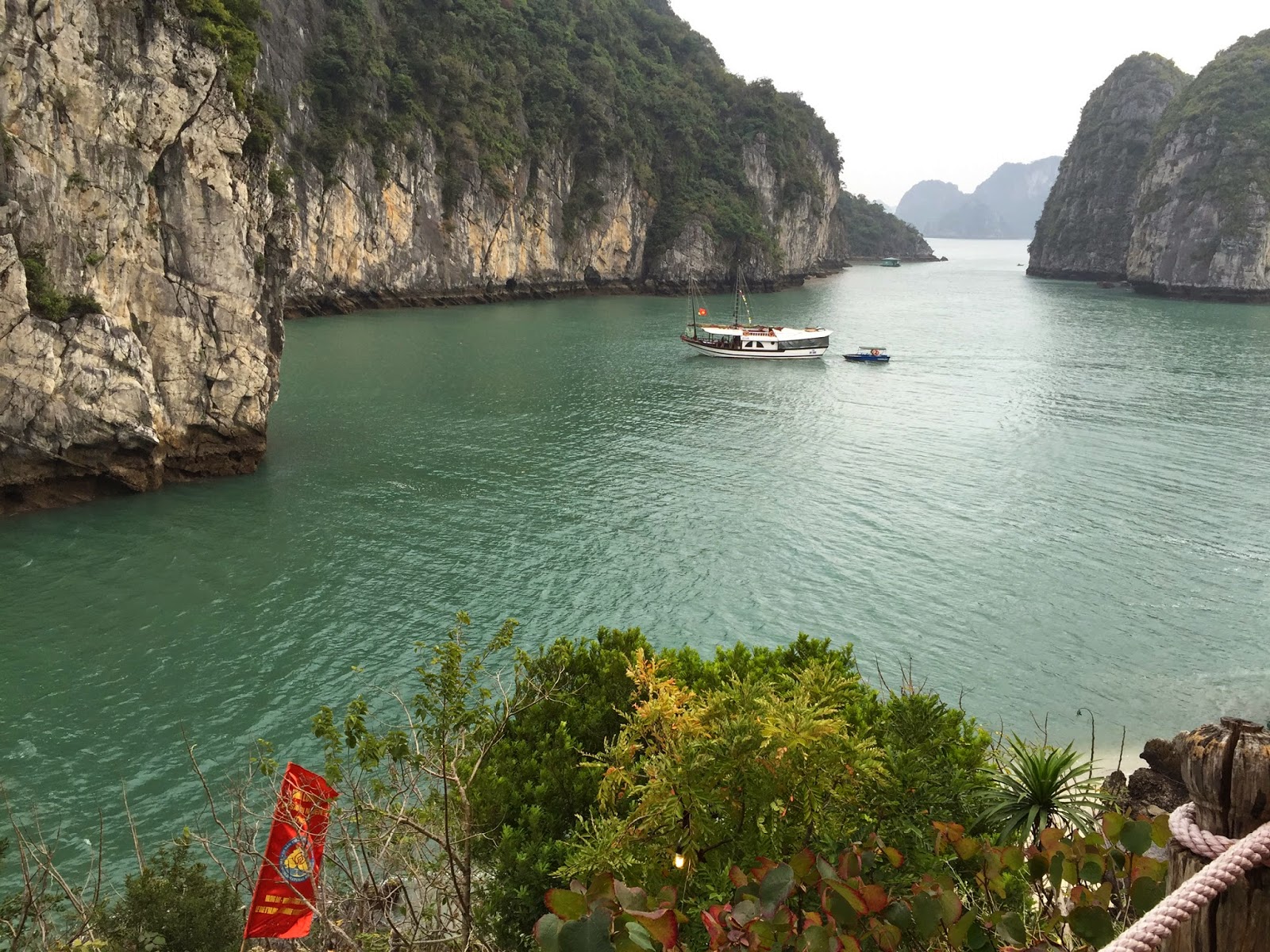 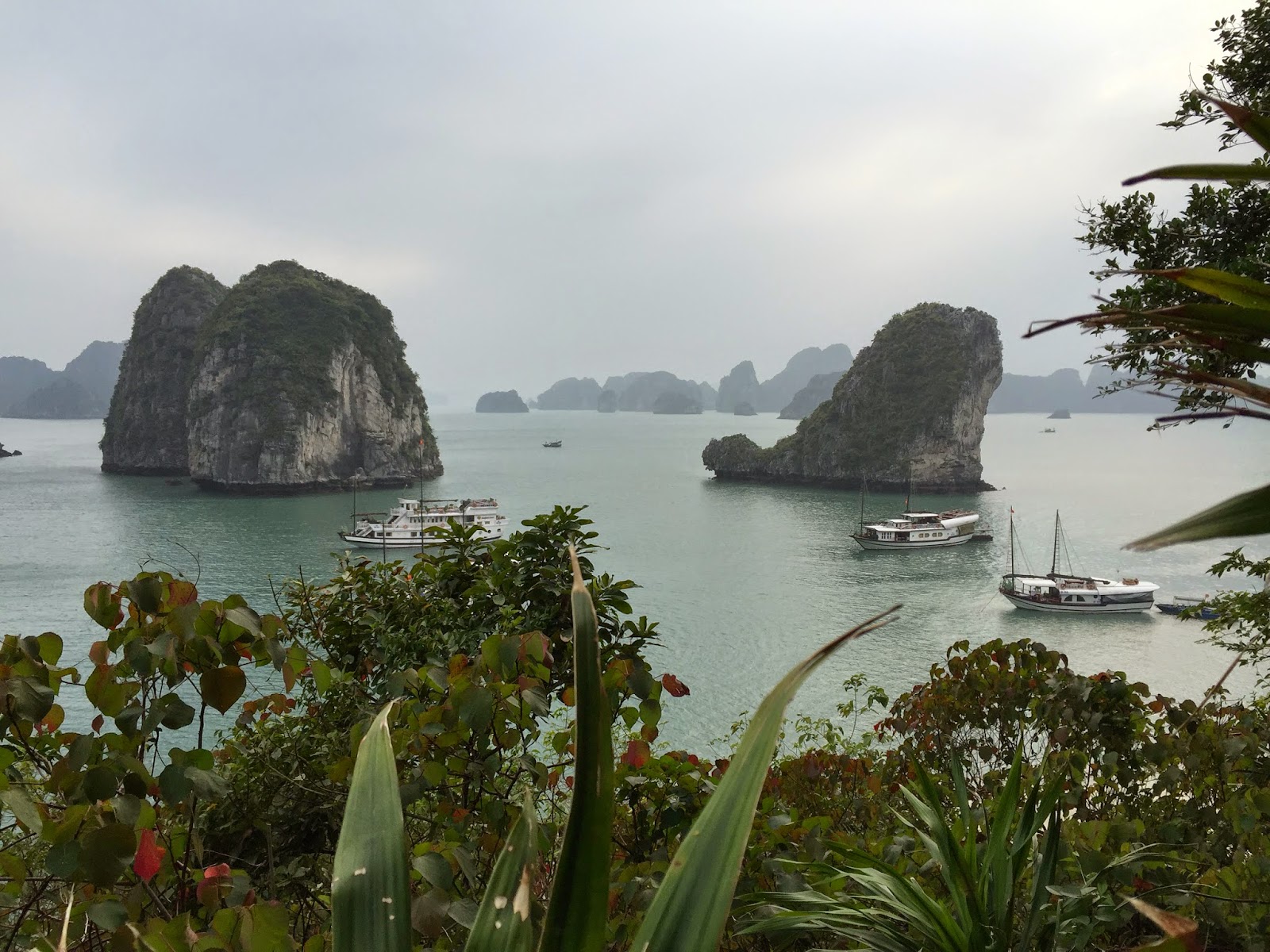